5 things every homeowner should know about fire safety 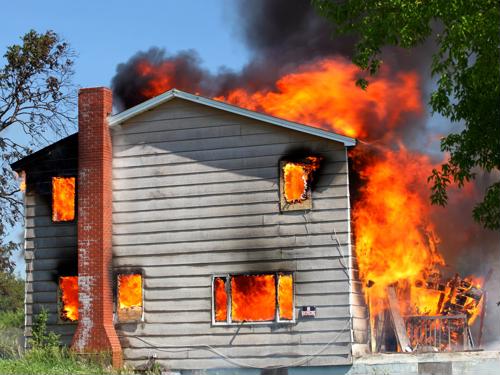 The physical make-up of many of today's homes is making them more at risk for serious fire destruction.

If you’re in the market to buy a house – or you’ve recently done so – there’s some good news and bad news. The good news is the state of the industry is quite strong.

In November, for instance, existing-home sales skyrocketed to a seasonally adjusted annual rate of 5.8 million, according to the National Association of Realtors. Up 5.6 percent from October, that’s the biggest jump in more than 10 years. Home values are rising, due largely to robust demand, which is an indication of economic prosperity. In fact, asking prices have increased on a year-over-year basis for 69 months in a row, based on NAR’s estimates.

Furthermore, homeowners are not only buying – they’re buying big. Newly built properties are larger today than they’ve been in previous years, averaging around 2,687 square feet, based upon the most recent figures from the U.S. Census Bureau.

So what’s the bad news? According to a safety and consulting firm, the scale and format of today’s residential properties are making them at a higher risk for being destroyed should there be a fire.

That’s the conclusion of a report from Underwriters Laboratories (UL). Due to a wide variety of factors – such as homes being larger with open, more simplified layouts – flames are able to tear through properties at a faster speed.

“UL’s research scientists and engineers have conducted a number of innovative tests and evaluated their results, and have identified that the modern home fire is a ‘perfect storm’ of conditions and outcomes,” the report said.

Escape time much shorter
This is worrisome for a number of reasons, none more so than the safety aspect, as the hastened speed with which flames can spread leaves residents with less time to escape.

How fast can a residential fire get out of control? Back in the 1950s and 1970s, people had around 15-20 minutes to get out of their homes without harm. Fast-forward to today, the time interval has shortened to between three and five minutes, the UL report warned – eight times faster than yesteryear.

It isn’t just layout and building materials that are apparently leaving homeowners with precious little time to flee when there’s a fire. It’s also due to the furnishings homeowners have. UL noted that many of today’s modern accouterments and the material they’re made up of tend to burn more quickly than the all-natural materials that used to line sofas chairs, love seats and rugs.

The winter is the most common season that residential fires occur. According to the National Fire Protection Association, between 2011 and 2015, around 15 percent of all home fires reported to emergency officials involved heating equipment. Of these, nearly 45 percent are caused by space heaters, which were responsible for 53 percent of direct property losses, in terms of structural damage.

Brian Daubert with PayneWest Insurance recommends buying heating equipment that has automatic shutoffs when the unit gets to a certain temperature limit or that has a timer where the unit shuts off after a certain period of time.  In addition, make sure and follow the manufacturers recommendation that the heating unit be in an open area, with no possible obstructions that could interfere with its operation.

Ensure fire alarm is in working order
How can you protect yourself and your possessions? The basics work best. For starters, make sure you have a smoke detector on every floor of the house. These should ideally be located on the ceiling, just outside of bedrooms and/or offices. The NFPA suggests checking these alarms on at least an annual basis, such as the batteries. The unit itself should be replaced every 10 years.

Daubert suggests putting a service note on your calendar to replace and check fire alarm functions so that it is easy to remember.

Have fire extinguisher handy
Fire extinguishers are extremely useful in preventing fires from spreading. Be sure to have at least one in the house. Should you need to use one, make sure to direct the extinguisher at the base of the fire, as this is the most effective way to douse the flames.

Develop an escape plan
Would your kids know what to do if there was a fire? There isn’t much time to think in emergency situations, so be sure to go over with your family the best doors or windows to leave from. Fires are naturally unpredictable, so you may want to discuss alternative routes if the best exit point is blocked.

Go over your insurance policy
Home insurance can help you replace possessions that are destroyed or pay for repairs if flames or smoke damage was contained. However, your policy may need to be updated if you’ve implemented renovations. Take a moment to review your plan and get in touch with your insurer to determine what additional protections may be required.