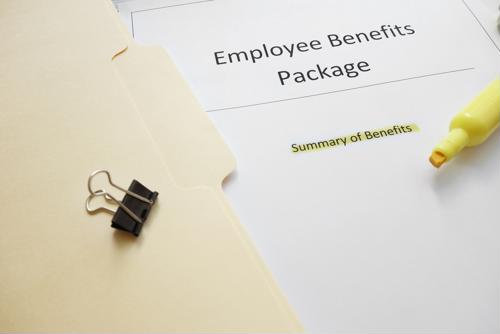 In a bid to help staff members improve their good health and well-being so they can become more effective employees, more businesses make group health and wellness benefits available to their workers, a newly released survey suggests.

“90% feel their workplace supports their pursuit of becoming healthier.”

Not only are companies making these perks available, but they’re actively involved in promoting them by encouraging staff to seek them out. Roughly 90 percent of workers in the survey acknowledged feeling supported in their pursuit of becoming healthier, the poll found.

“Since professionals spend so much of their time at work, health and wellness programs aren’t just a nice to have – they are becoming a key factor in employee job satisfaction and well-being,” Britton explained. “Not offering these benefits can put a company at a disadvantage when it comes to staff recruitment and retention.”

56 percent of Americans covered through their employer
Health and wellness benefits – which may include on-site exercise equipment, fitness tracking devices and opportunities to meet with personal trainers or dietitians – are often included as part of businesses’ employer-based health insurance packages. Based on the most recent statistics available, approximately 90 percent of Americans have health insurance, according to data from the U.S. Census Bureau. The majority of people covered – almost 56 percent – have policies through their workplace, with Medicaid being the second-most common subtype of health insurance, owned by 19.4 percent. Seventeen percent have Medicare.

All this being said, just because a larger percentage of businesses are adopting “health first” mentalities doesn’t necessarily mean workers are succeeding with the health opportunities available to them. When it comes to the biggest obstacles to getting in better shape, 30 percent of respondents in the OfficeTeam poll cited workplace celebrations, which often involve high-calorie food and beverages. Roughly 1 in 4 pointed to snacks and desserts brought to work by colleagues. This may explain why 60 percent of workers try to bring their lunch with them to the office, something health experts recommend to get trimmer and curb cravings.

Weight gain is a battle millions of Americans are waging, and employers seem to be helping them in that fight, both for the good of their employees’ personal health as well as that of the company’s. According to the U.S. Centers for Disease Control and Prevention, more than two-thirds of adults nationwide are considered obese. Heart disease, heart attacks, stroke and type 2 diabetes are all highly associated with obesity. Individuals with a body mass index of 30 or more, on average, have annual medical costs that are nearly $1,500 more than individuals within a healthy weight range.

Obesity less prevalent in Montana, West overall
The Pacific Northwest and Mountain West are two of the healthier parts of the country in terms of low obesity levels. In both Washington and Oregon, for example, between 25 percent and 29 percent of the populace are obese, according to Gallup-Healthways Well-Being Index. In Idaho and Montana, the rate is below 25 percent. The Midwest is predominantly the area where obesity rates are high, averaging 30 percent or more. These include Iowa, Missouri, Kentucky, Arkansas and Oklahoma.

A health-conscious lifestyle, much like working for a living, is a full-time pursuit. At PayneWest Insurance, we help groups find the health benefit offerings that best serve their needs, then chart out a plan that makes those goals both actionable and achievable. Every group tries to offer the best possible benefits while still managing their spend; we can help find that balance.