Keeping your workers safe at the construction site 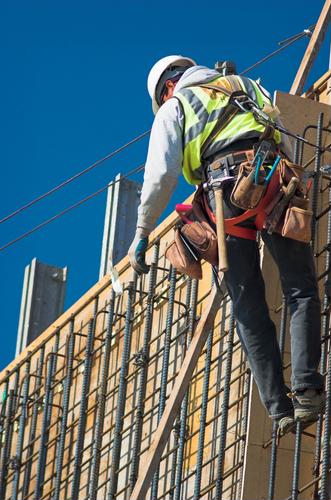 Safety should never take a back seat to productivity.

Spring is here at last, the annual season when the grass grows, the temperatures warm and the flowers bloom. But vegetation isn’t the only thing flourishing when the seasons change – so do contractors, as builders look to get ahead of homebuyers in the market in an effort to shore up dwindling inventory, according to the National Association of Home Builders.

But in contractors’ haste to get a jump on the action, it’s important that project leaders make sure their workers’ physical well-being is prioritized and isn’t second fiddle to productivity.

There’s been a disturbing trend at many of the country’s workplaces, where more people are getting injured. Many of the injuries are so serious as to be fatal. For instance, in 2016, roughly 5,200 people were killed at the job site due to accidents, according to the most recent numbers from the Bureau of Labor Statistics. That’s up 7 percent from 2015 and marks the fourth consecutive year of occupational injuries rising.

The construction sector saw a double-digit surge in fatal injuries in 2016, the most recent year for which data is available. Specifically, deadly workplace accidents among builders and maintenance workers jumped 14 percent from 2015, according to estimates from the BLS.

Preventable injuries more common than ever
Accidental injury occurs so often, it’s now in the No. 3 spot for top causes of death in the U.S., according to the National Safety Council. It’s the first time in recorded history this has happened, with the uptick in 2016 the most significant year-over-year increase since 1936.

Deborah Hersman, president and CEO of the NSC, said that many employers simply aren’t adopting a safety first mentality.

“Our complacency results in 442 deaths each day,” Hersman warned. “For years our country has accepted unintentional injuries as an unavoidable reality. The truth is, there is no such thing as an accident. Every single one of these deaths was preventable.”

The construction industry, which accounts for a substantial portion of the U.S. economy, often entails job functions that can be risky when the appropriate precautions aren’t put in place. Injuries can range from slips, trips and falls to accidents involving high-powered equipment.

Missed step most frequent ladder hazard
Ladder accidents are particularly frequent and are often due to silly mistakes or using equipment in a way that is not intended. In 2016, for example, missing the last rung and overreaching were the two most common causes for injuries involving ladders, according to the American Ladder Institute (ALI).

Ryan Moss, ALI president, stressed these kinds of accidental injuries can be avoided by working smarter.

“Most ladder-related accidents can be easily prevented with the proper education, precautionary actions, and safer, more innovative equipment,” Moss advised.

1. Choose or purchase a ladder that fits the job, ensuring it’s the appropriate length.
2. Set up ladder exactly as instructed.
3. Check for signs of wear that may compromise a ladder’s integrity.
4. Use a ladder as it’s meant to be used.

The Occupational Safety and Health Administration also has suggestions on how to prevent falls on the job site. Core components to a safe construction zone are planning, training and providing the right equipment for tasks at hand.

“Residential contractors often don’t have the resources for an internal safety specialist, so they may need to look to their insurance agent, broker or carrier for support with safety and compliance,” Hollcroft advised.

As a construction professional, injuries can throw a real wrench into your productivity goals. But accidents happen, and when – or if – they do, PayneWest will be there to provide you with the coverage you need to bounce back. Talk to us to learn more and schedule a risk assessment.