Are teens overestimating their driving capabilities? 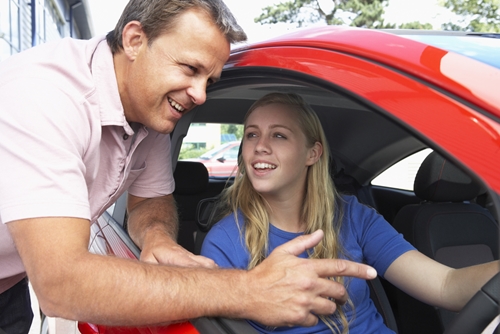 Setting a lifelong example to your student driver doesn't stop at the end of the driveway.

“Anticipation” might be the best word to describe how teenagers feel about getting their driver’s licenses. It’s hard to blame them, as getting one’s license is in many ways a round-trip ticket to freedom and opportunity.

But based on a recent poll, it seems that many teens may be overestimating just how good they are at driving, which may explain why they’re more accident prone versus those who have greater experience under their belts.

Almost 60 percent of teenagers – ranging between 13 and 17 – believe that they’re every bit as good a driver as their parent or guardian, according to a newly released survey conducted by KRC Research. At the same time, though, close to 80 percent of these same teens point to car accidents as their biggest safety concern, with 72 percent attesting to having felt like they were in danger while driving.

Deadly accidents rose among teens in 2016
Their fear is not without cause, as due to inexperience, automotive crashes is the leading causes of death among teenagers in the U.S. Indeed, according to the National Highway Traffic Safety Administration, there was a 4.3 percent increase in deadly young driver accidents in 2016 compared to 2015, with “young” defined as motorists between 15 and 20 years of age.

What also runs counter to teens’ notion they’re just as good at driving as their parents is their self-professed discomfort with driving in inclement conditions. A slight majority of respondents in the KRC Research survey admitted they wished they’d learned more about how to safely drive in wet weather, specifically rain, snow and ice. Additionally, 44 percent said they’d like to know more about how to safely and efficiently change a flat tire, having apparently not learned about this during driver’s education.

“Inexperience with driving in inclement weather – often at high speeds – continues to be a key factor in many accidents with teens,” noted Brian Daubert, personal insurance sales director at PayneWest Insurance. “Teens simply don’t have the time behind the wheel that’s necessary to react defensively during adverse conditions. That type of experience comes over time.”

The third week in October is National Teen Driver Safety Week, and as such, the NHTSA is urging parents to sit their teens down and start a conversation, laying out some of their expectations and hammering home the message about the importance of always driving defensively.

Passengers look to drivers to set an example
One of the easiest thing teens can do – which also happens to be the law in just about every state – is always wearing seat belts, even for short trips. In 2015, the latest year for which data is available, nearly 60 percent of the 531 passengers who died while teens were behind the wheel were unbuckled, according to NHTSA data. Drivers can set the tone, because in those crashes where teen drivers were not wearing their seat belts, the same was true for 84 percent of passengers.

Parents should also talk to their kids about avoiding distractions while driving, specifically handheld devices. Even though texting while driving is against the law, inattention was responsible for 3,450 highway fatalities in 2016, based on NHTSA’s latest findings. Ten percent of all fatal teen driving accidents in 2015 were related to multitasking.

William Warner, program manager for the Oregon Department of Transportation’s driver education program, warned parents not to underestimate the impact they have on their teens’ actions.

“Parents have a very strong influence on their teens, even as they grow older and become more independent,” Warner advised. “NHTSA offers parents and caregivers tips and a framework to talk to their teen drivers about risky driving behaviors that can lead to fatal consequences.”

Teenagers in Oregon, unfortunately, are not immune to crash risk. Since 2012, more than 55 people have been killed on the state’s streets involving 15- to 17-year-old drivers, according to the ODOT.

“Laws are not enough to protect these young drivers,” cautioned Troy Costales, ODOT’s safety division administrator. “We need parents to set the rules before their teens hit the road. We hope parents will start the conversation about safe driving during National Teen Driver Safety Week – but then continue the conversations every day throughout the year to help keep their teens safe behind the wheel.”

Daubert added parents shouldn’t sign off on their teens’ driving solo simply because they reach the appropriate age.

“In my experience, driving tends to be perceived as a right, rather than a privilege, by many teens,” Daubert said. “Parents should make sure their teens have demonstrated the maturity and seriousness they need to drive responsibly before handing over the keys.”

At PayneWest Insurance, we further encourage parents to review their auto insurance coverage so they can rest assured their teen drivers are properly covered when out on the roads today, tomorrow and the rest of their lives.