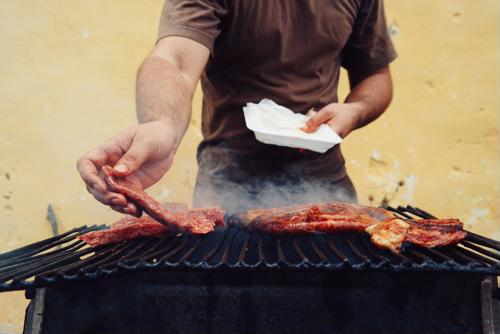 Few backyard activities are more common and universally enjoyed than barbecues, particularly during the summer months. Indeed, you might as well call the country the United “Grillers” of America. According to a recent survey conducted by the Hearth, Patio & Barbecue Association, more than 50 percent of consumers fire up their grills on summer holidays like Independence Day, Memorial Day and Labor Day, among others. However, an equally robust percentage of the country grills throughout the year – even in the dead of winter.

While most of the country’s cookouts go off without a hitch, you may be surprised by how many do go awry. In fact, according to the National Fire Protection Association, approximately 8,900 home residential fires on average each year involve grills.

While most of these flare-ups led to burns on the hands and arms – some quite serious – they can cause damage to homeowners’ property when hibachis aren’t positioned well away from standing structures. Between 2009 and 2013, approximately 27 percent of grill fires occurred on balconies and porches, according to NFPA’s analysis. Roughly the same percentage occurred on patios and courtyards.

Lorraine Carli, NFPA vice president of outreach and advocacy, noted that just about all of the grilling fires that occur are preventable.

“The leading causes of home grilling fires are failing to properly clean the grill or having a flammable object too close to the grill,” Carli explained. “It’s also important to check the grill for damage before using it for the first time each year, and then to check it regularly.”

Owned by nearly two-thirds of U.S. households, according to the HPBA, gas grills are far and away the most popular variety. Propane grills are also the most common outdoor cooking units that lead to fire, more so than charcoal, based on the NFPA’s analysis.

Even if you’re a grilling veteran, it never hurts to go over the basics of barbecuing safely. The NFPA’s offers the following recommendations:

Here’s to a happy, healthy and safe grilling season today, tomorrow and all year long!