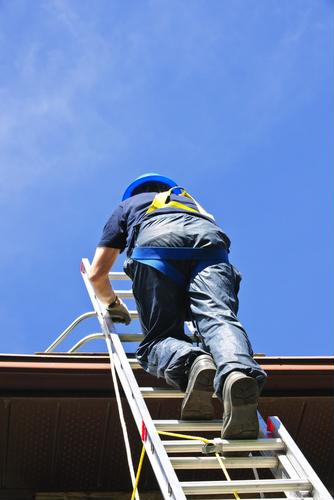 A worker injury is one missstep away.

In the construction industry, the equipment and utilities that can make the job a whole lot easier are the very same ones that can make them dangerous. This is certainly the case when it comes to power tools, but it’s also true with fairly routine tools of the trade.

Perhaps the best example of this is the ladder. Step ladders have been around for millennia, and while technology has made them more resilient and sturdy, all of them serve the same overarching function: Allowing you to get to places you wouldn’t be able to otherwise.

“Missing the last rung is the most common reason for ladder-related injuries.”

The problem is ladders all too often are misused, especially in the workplace. Based on research performed by the American Ladder Institute, slipping or missing the last rung and overreaching were Nos. 1 and 2, respectively, in ladder-related workplace accidents in 2016.

Employers failing in fall safety
This data corroborates annual figures that the National Safety Council releases each year. Almost without fail, fall protection tops the 10 most common workplace violations in America. Not only was it No. 1 in 2017, but ladders had their own category.

According to the Center for Construction Research and Training, nearly half – 42 percent – of all construction zone fatalities stem from falls, Safety and Health Magazine reported. Of the 768 that happened between 1982 and 2015, roughly 20 percent affected employees who’d been hired within the previous two months. Furthermore, of the deaths related to falls, 107 were from heights of 30 feet or more.

Ryan Moss, president of the ALI, said the vast majority of these types of injuries and deaths are avoidable.

“Most ladder-related accidents can be easily prevented with the proper education, precautionary actions, and safer, more innovative equipment,” Moss advised.

“Ladders can be used safely, but they are inherently dangerous because they are portable and people must be relied on to use them properly,” said Hollcroft explained. “Selecting the correct ladder and using it properly are probably the two most important considerations in ladder safety.”

How do you know which ladder to use? It depends on the job and the people who are using them. Here are a few tips to keep in mind before you or your workers step foot on one.

Select the appropriate duty rating
Ladders break down into one of five classes, or duty ratings, when it comes to choosing those designed for weight-bearing workloads. They include, in ascending order: Type III, Type II, Type I, Type IA and Type IAA. They’re grouped in 25-pound increments, as Type III has a weight capacity of 200 pounds and Type IAA, which holds in excess of 325 pounds. To determine the appropriate one, the ALI suggests the following formula:

The ladder you choose, of course, should exceed the total. Also, be sure to include in the formula any supplies that are on the ladder itself.

Choosing correct variety
Ladder varieties run the gamut, including – but not limited to – articulated, combination, extension, fixed, platform, step and trestle. How do you decide which one is best? The ALI has a breakdown of how each is used at the bottom of the page and what their prime functions are. For example, articulated ladders have a maximum of 15 feet, making them preferable to jobs that are less than 10 feet off the ground.

Be mindful of slip potential
The elements can make ladders extreme hazards when it’s raining or snowing. That’s why you should not use them when conditions are slippery. However, even when the weather is cooperating can lead to a misstep. Check to see that the rungs are dry and that dirt isn’t logged in the bottom of boots. This is another way of ensuring its safe to climb.

Hollcroft advised you don’t need to be very high to be injured after a fall, either, noting that they can happen from less than 10 feet.

The ALI has a few other maintenance tips that are important to follow.

Nothing is more important than the safety of your workers. PayneWest Insurance has the resources that can keep them off the injured list through our risk management services.